In a recent study scientists compared the efficacy of an athlete’s rating of perceived exertion (RPE) vs. standard training load measures captured by our various gadgets like HR (measured with LuTRIMP), power (measured in kj spent) and training stress (measured in TSS) over a 4 year period from 21 professional cyclists with the Germany-based Team Sunweb.   After analyzing 11,655 training sessions, time trials, and road races (which included multi-day stage races like the Tour de France) they found that there was an almost perfect correlation between RPE and these other measures.  So RPE is in fact, a gadget-free way to accurately measure your physical load during training.

Fun Fact: The creator of the RPE system, Gunnar Borg made many different scales for self assessement. The one used in this study is a 15 point scale from 6-20….which seems odd except for the fact that it was originally created for athletes and modeled after heart rate from 60 bpm to 200 bpm. It has also been shown to be the most accurate when rating physical exertion while the 10 point scale is used most often by doctors to rate things like the level of pain a patient is experiencing, etc. SOURCE: “Borg’s Perceived Exertion and Pain Scales by Gunnar Borg”

Remember they said “almost perfect”….  The study also found that during competition RPE tends to degrade and become less accurate.  Scientists found that in road races both RPE and heart rate tend to be less accurate measures vs power and training stress citing that:

Essentially, even with highly trained professional athletes, their perception of effort becomes compromised with increased mental fatigue.   So if the mind is incorrectly perceiving the limits of the body imagine what would happen if we could more accurately understand just how far our body can go?  This is pretty interesting and aligns well to the science behind the Rewire system which is based on mental fatigue training designed to make you more mentally tough and to reduce the perception of effort during competition.

Learn How to Use RPE in Training

For more info check out this study: 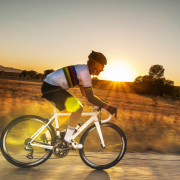 101 Guide to using RPE in Training

101 Guide to using RPE in Training